In Web Wars, the player controls a bird flying through a Web of Fantasy, shooting enemies, dodging their fire and collecting various creatures. There are 20 different creatures to collect in all.

At times a portal will appear for the player to fly into to be taken to the Trophy Room, which displays all of their captured creatures.

If the player misses two chances in entering the Trophy Room during a wave, a Cosmic Dragon will appear over the Web, out of weapons range, and shoot down at the player. 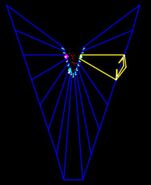 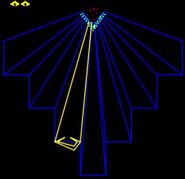 Web Warp was released by MB in 1983, was coded by Duncan Muirhead with Bill Hawkings, and designed by Patrick King. This is another highly original Vectrex game with it's closest ancestor being the original Tempest arcade release in 1980. Web Warp was also released by GCE in the U.S. where it is known as 'Web Wars'.

In Web Warp the player pilots the 'Hawk King', an interesting looking figure which has an attached 'capture rod' which it uses to capture it's prey which are called 'fantasy creatures'. As the player manoeuvres the Hawk King down a 3D web-shaped corridor, the idea is to capture the fantasy creatures with the rod as they come head-on at you at sometimes blistering speeds.

Once a creature is caught by the Hawk King it is transported to a trophy room which displays an animated picture of the captured creature which are insect-like in appearance. 20 such creatures exist throughout the game and the trophy room is like the interlude between levels which marks your progression. If a creature is missed by the player's hawk the 'Cosmic Dragon' appears who will shoot fireballs so it's a good idea to intercept each creature early on in the level.

'Drones', which are the deadly guardians of the web, come down the web and the Hawk King has a blaster to kill them as they ride up and down the sides of the web. After around 7 creatures are captured the action becomes quite intense leaving only seconds and quick reflexes to put your capture rod into action.

Web Warp comes highly recommended and as it was one of the last commercial games developed for the Vectrex has a graphical edge over it's predecessors. Web Warp appears on ebay time to time and goes for around $35.U.S.

Needs to be filled out a bit more in details, have box scan or another screenshot for infobox