Sub Wars is a two player only game from Mountain Goat. In the game both players control a submarine and have to use different weapons to sink the other boat.

The inspiration for the game came from the Vectrex title Space Wars. Creator Mountain Goat felt that Space Wars could have been even more enjoyable if a bigger arsenal of weapons were available.

The game was specifically created to be played in a family / party environment - hence the no support for a computer controlled enemy.

The commanders of the submarines can use auto-homing torpedoes, mines, and they can even ram the other boat to sink it.

Submarine commanders can launch countermeasures to defend against torpedoes.

The submarines can move unconditionally during the game. For other offensive / defensive maneuvers the submarine needs energy. Commanders can replenish the energy of their subs by picking up energy points from the sea floor.

Each submarine can have two torpedoes in the water at any time. Torpedoes follow the enemy sub and can only cause damage to the enemy.

Subs can lay up to 4 mines each. Mines have a quiet period right after they are put in the water. After a few seconds they go active and either submarine coming in contact with them will be damaged.

Countermeasures can be used to defend against torpedoes. If an enemy torpedo touches a countermeasure, both the torpedo and the CM is destroyed.

The controller on the right belongs to player 1 and the one on the left to player 2.

Button 3 lays a mine.

On the bottom of the screen there are indicators for both subs for both their energy - a horizontal line - and also for the hull damage - vertical bars. Once the last vertical bar is gone, the sub is sunk.

After the 1.0 version was released on the Vector gaming forums, comments were solicited. Mountain Goat is working on the 1.1 version incorporating the suggestions.

The music in Sub Wars is W. A. Mozart's "Requiem", rewritten for the Vectrex. "Lacrimosa" is played during the intro scene, the battle is accompanied by "Confutatis", and during the win screen, "Sanctus" is being played on the !AY-3-8912 chip. 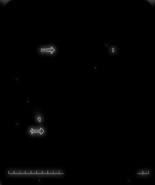 Sub 2 about to be hit by torpedo 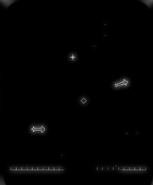 This article was featured from November - December, 2020.