Battlezone was an early First Person Shooter vector arcade game where players, controlling a tank, would take on a host of enemies in a 3-D world. It would end up being ported to multiple console and computer systems.

Stramash Zone is a clone of Battlezone.

The player, the "Tank Captain", controls a tank on Mars[1] in a first person viewpoint. They must destroy all enemies possible while avoiding getting hit in the process, as being hit by an enemy shell or a Missile will cause them to lose a tank and the game will end when there are no more tanks left in reserve.

Immediately at the start of a game, a warning tone will sound, indicating that an enemy is nearby; arrows pointing left or right indicates the direction the enemy lies. The player's radar (at top center of the screen) will also show most enemies as well.

The player can only fire one shell at a time, which they can only fire again if the shell hits a target or the next shell becomes available if it misses a target. Not long after a target is destroyed another enemy will appear.

The enemies players face are as follows:

Geometric-shaped Obstacles also fill the playing area, which can be used as protection from enemy fire (on default game only; see below section) and occasionally against Missiles.

The difficulty level increases with the enemies becoming faster and smarter and the player has less time to try to destroy a Missile.

Although not declared a port, there were still several differences from Battlezone, as Tanks start off much dumber in this version, along with they can run away from the player for a much longer time. Both Tanks do not get stuck against an Obstacle for anywhere near as long as on Battlezone. Saucers hardly move at all, as they move more sideways on Battlezone. Missiles were also a lot faster, as the player usually only got one shot in order to destroy them, rather than speeding up later in the game. The game ran much faster and did not have as many bugs, such as having enemies disappear on radar and then showing up elsewhere. Text stating if enemies are to the left or right was replaced by arrows. The player earned an extra tank at 10,000 points, which does not happen with Stramash Zone, although they have an extra tank to begin with on a new game. There was only one game though, rather than three on Stramash Zone, plus the scoring differs. 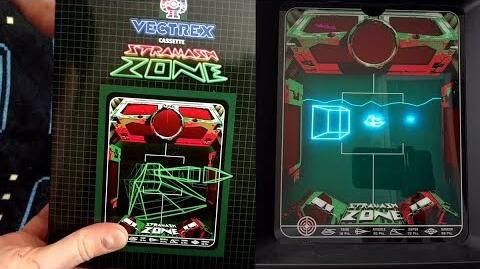