This article is about Spike, the character. For the 1983 video game, see Spike.

Due to everything in regards to the Vectrex being cut short by Milton Bradley pulling advertisements for the machine and the video game crash of 1983-1984 happening, with such a brief lifespan, nothing Vectrex-related would last very long, not even the Vectrex newsletter, as only one issue is known to have ever been printed. The mascot known as Vecto touting the game system only appeared in that one issue as well and has never been heard from since. 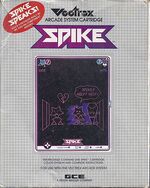 However, once the original Spike game was released, that pretty much changed everything. The pseudo-3D, somewhat of a Donkey Kong knock-off garnered quite a little bit of attention, due to being the only Vectrex game that had speech (since the Vectrex was not capable of producing it), especially with the voices coming off as being funny to most in general, due to sounding like automated pieced-together voicemail recordings of today, as Spike’s girlfriend Molly said “oh, Spike” with little emotion after being rescued from Spud, Spike’s enemy. Spike’s “darnit!” catch phrase had a bit more emotion to it once he lost a life in the game though.

Spike, after all, had a bit more emotion to spare as the game would start after he kicked in the door to Spud's hideout[1] (which this was not shown during any of the game cinematics) and must rescue Molly from said place. He would also have to run across platforms, jump across open spaces, climb ladders, and avoid Bouncers and Birds as he sought the key to Molly’s cage so he could rescue her, although he could also kick away any enemies and grab Molly’s Bow to freeze them for a short time.

Unofficially, the Vectrex mascot was born, as apparently a graying, balding alien selling a vector gaming machine didn’t have as much appeal as a certain other character of unknown origins did.

Production for the Vectrex would end in 1984. However, due to the Vectrex being given a rebirth in 1995 due to the first version of the Sean Kelly Multicart being released, it would not be long before Spike's legacy would continue when he started reappearing in modern day homebrews soon afterwards.

He would first appear in the Spike's Water Balloons game on the All Good Things cartridge, released by Classic Game Creations in 1996. The game combined elements of the Atari 2600 Kaboom! cartridge and the arcade game of Kick Man, as Spike had to pop all of the water balloons with his head that Spud tossed at him. If he missed a balloon, he could kick it back up towards the top of the screen, but let one hit the ground and Spike would lose a turn (as Molly said "oh no!" at the top of the screen).

Spike Hoppin', a clone of the Q*Bert arcade game, came next, being the first ever homebrew that talked (and the second ever Vectrex release to have speech). In this game, Spike must jump on all triangles in a level (which form a giant pyramid), turning them into one single matching shade (either bright or dark) in order to advance to the next level. Spud would appear as a diamond-shaped object that would start from the top of the screen and make his way down, hatching into his regular self when he reached the bottom row of triangles. Touching either version of Spud would result in Spike losing a life, although jumping on one of the Magic discs on the sides of the pyramid after Spud hatched would knock him off the screen for a few seconds.

Also hindering Spike's efforts were LOG, who would revert whatever triangles Spike hopped on to their original shade, and Backwards monsters, who would appear at the bottom of the screen and make their way up. Balls would also appear from the top of the screen and drop downwards, which would also cost Spike a life if they made contact with him. Helping him out though was a Magic hourglass that froze all onscreen enemies for a short time.

Spike would not appear again until the Spike's Water Balloons game on Vectopia, being the exact same game as the one that appeared on All Good Things, although this version was programmed to work with the Vectrex’s original analog controller. And Spike did double duty here, as he also appeared in an unlockable easter egg somewhere in the cart as well.

Spike would then later evolve a bit graphically, as his look changed a lot on the unfinished Super Spike World demo on the Space Frenzy cartridge, as he was shown in a side view for the very first time in all of programmer John Dondzila’s creations, giving more emphasis on his spiky coat, rather than looking like a star with arms and legs as he did in most incarnations. He took the place of Mario in this Super Mario World clone, gathering up objects as he hopped on platforms and trees while jumping on birds, Spud, and even what seemed to be the Enterprise from Star Trek (?). The demo had no sound and there was no way to die, and after a while the area started back over at the beginning in a loop.

Of course, Spike didn’t just appear on Classic Game Creations’ products either, and he not only made an appearance in, but his look was also radically changed again in the Vec Sports Boxing games (the original and the Limited Edition), having a stick figure body with Spike’s head on top as he battled against several other boxers. His full name was also Spike Tison, a play on words in regards to real life boxer Mike Tyson.

He also appeared on the Spike’s Spree game of the VeCaves/Spike's Spree cartridge, created by Mark De Smet. The game was based on the Atari 2600 cartridge of Fast Food, where the player controlled a mouth (Mighty Mouth) that had to eat various foods as they flew towards Mighty Mouth from the side of the screen. Eating six purple pickles would cause the game to end. In this version, though, half of what Spike eats could kill him (Birds, Bouncers, and Spud from the original Spike), and the other, actual digestible items Spike had to eat in a certain order in order to continue throughout the game.

Spike also made it onto Spike Goes Down, the hidden game on Protector LE, which the Atari 2600 homebrew of Man Goes Down was very similar in nature, as Spike would have to continually drop down a scrolling area and collect items to continue the game. However, he must avoid the "pointy bits" at the top and bottom of the screen[2]. He would also become quite the acrobat in Spike's Circus, as he had to juggle various Vectrex icons while riding a unicycle on a tightrope.

In the currently incomplete game of Spike Goes Skiing (which is based on the Horace Goes Skiing title on the Spectrum computer), Spike skis down a bunch of slopes, avoiding trees and flags (skiing in between flags results in points, but hitting them results in losing a life) in his quest for the finish line. The game is also supposed to have a Frogger-like beginning as well, where Spike crosses across several lanes of traffic in order to pick up his skis (and then proceed to the ski slope stage), along with a secret third level of the game as well (which it is currently unknown what Spike’s duties will be there).

Spike's Slam Pit looks to be a clone of the arcade game Reactor, where a growing reactor core threatened the player's existence. Players had a certain number of enemies to knock against the walls per level in order to advance to the next one. In a screenshot on the Vectrex database, what appears to be Spike's head replaces the player's vessel, whereas what appears to be Spud's head is one of the enemies in the game, replacing the original energy particles.

There have also been shots of some unnamed Spike card game, Spike's Sea Snap Safari (which a contest was held for people to send in various entities that they drew with a tool to be included in the game, which the site stated the game would be released in 2007 or 2008[3]) and Spike's Circus 2 on the Vectorzoa web site for a few years now, which it is currently unknown what these games are going to be about and when they will see releases. So time will have to tell on these, as well as any other possible homebrew projects involving Spike.

After all, the Vectrex has yet to have a tennis game.