The Vectrex community was taken by surprise in 2003 when the announcement of the upcoming, original release of Protector LE was revealed, as programmer Alex Herbert envisioned that the arcade classic of Defender could be brought to the Vectrex. A downloadable video was posted as well, showing that the fast and furious gameplay from the original did indeed seem to be possible after all. It quickly sold out of its 100 copies in less than three weeks of release[1], which came with an overlay (a bit rare for Vectrex homebrews in general), was numbered and had an embossed foil logo on its box. It also came with the Spike Goes Down game included with it as well as an unlockable bonus.

Like the Defender original, the player controls a ship that flies over a planet's surface. Potentially the only enemy at the beginning are Landers, which do not move very quickly but occasionally shoot at the player. However, there are humanoids on the surface of the planet that the Landers can pick up, which, if they are to reach the top of the screen with a humanoid, the Lander will then turn into a Mutant, which moves much faster and fires more aggressively than a Lander. If all humanoids are taken captive during a wave then the planet will explode, causing all Landers to become Mutants, and "free space" is very difficult to survive for most players in general. The planet gets restored after every four waves though.

Also, if a player takes too long during a wave, a fast-moving Baiter will appear and cause trouble until the player finishes that wave, which they will then receive a bonus for whatever humanoids are still remaining multiplied by the wave number.

From the second wave on, slow-moving Pods are worth a thousand points each, but they will deploy fast, dangerous Swarmers when destroyed. Bombers do not move quickly though, but they leave bombs behind that will destroy the player’s ship upon impact.

The player starts out each game with three Smart Bombs that will destroy everything onscreen (not counting Swarmers if Pods are bombed without being shot first) and an extra life and Smart Bomb is awarded with every 10,000 points.

(Note: these are the default controls, which can be changed.)

The "unofficial Vectrex mascot", Spike, starts off every game at the top of the screen. Multiple platforms start scrolling from the bottom towards the top of the screen. The player must move Spike off of a platform and land on another one below for as long as possible. There are a row of "pointy bits" at the very top and bottom of the screen; if Spike touches either row the game will end. Ten points are earned for each platform Spike steps off of.

vectrex.nl review Protector must be seen to be believed. Author Alex Herbert has done what many other Vectrex game developers before him have failed to do. That is bundle a magnificant game with an equally magnificant looking overlay and packaging. The packaging is professional right down to the robust black box and the etched Protector symbol proclaiming the games individuality. Inside an original Sean Kelly Vectrex cartridge, and is brand new thanks to Sean's ingenuity of supplying game developers with near exact replicas of the original Vectrex GCE cartridges from the 80's. Everything is so exquisite to the highest calibre; the simple yet informative instructions, the individually numbered cartridge and the outrageous bright pink overlay proclaiming "Protector" in authentic 80's font. This is RETRO to the maximum and will take some beating as Herbert lays down the gauntlet for all future games to personify. There were only 100 of these babies ever released worldwide and I was lucky enough to get a hold of one to take for a spin. Protector is based on the 1980 Williams Electronics "Defender" designed by Eugene Jarvis in which you pilot a craft and rescue "humanoids" from the savage and forbidding aliens. It's a case of zap or get zapped as you come up against "Baiters, Bombers, Pods and Swarmers" who will go out of their way to make sure the humanoids stay in their evil clutches. This side-scrolling shooter is fast, I'm talking off the dial fast, and at times you'll need every last weapon in your arsenal to combat the enemy and just stay alive for the few frenzied minutes of intense in-your-face gameplay. Included on the Protector Limited Edition cart is another equally brilliant game called Spike Goes Down. This game is like a bonus hidden game and has some of the best music I have heard on a Vec. The graphics in this Spike game resemble no other Vectrex game and although simple, Spike Goes Down could have been released independently and would have been a very worthwhile purchase. Going on the age of the Vectrex she is likely to have heart failure when you unleash the fury and grandiose of PROTECTOR upon her. The Vectrex community pays homage to Alex Herbert for his innovative and compelling programming techniques which push the humble Vec to it's limits. I can't recommend this game more highly. Be advised. Score 9.7/10 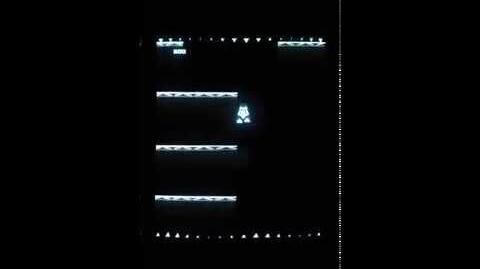 Retrieved from "https://vectrex.fandom.com/wiki/Protector_LE?oldid=7700"
Community content is available under CC-BY-SA unless otherwise noted.