Marine Fox is the first game from Mountain Goat released in August of 2015. It was inspired by the arcade and Atari 2600 classic Solar Fox.

You are captain Ariel Fox in command of the submarine "Medusa". Ariel is actually featured in the game on the Level announcement screen.

Your job is to gather all crystals from the sea floor but there is a catch...

The Sentinels have sent sharks to stop you.

The goal is to avoid being eaten while gathering all triangular crystals and advance through the levels. If there is any time remaining at the completion of a level (marked by a bar at the bottom of the screen), the player will receive a bonus of how much time is remaining. The player starts with five Medusas, which they will lose one whenever they come into contact with a shark. Once the player is out of Medusas the game will end.

Due to creator Mountain Goat asking for suggestions for improvements on Marine Fox on the Vector gaming forums, he took several ideas into consideration, which resulted in him tweaking the game and releasing the following[1].

This version played identical to the first, although a pause function was added.

This version had the most amount of changes to it, such as reassigning the pause function, as the ability to steer the Medusa using the Vectrex controller’s buttons was also added. The shape of the crystals along with the tempo of the game were also changed, making it easier. An additional fox insignia was added at the bottom of the game over screen. There was also a shark reset bug that was fixed, which originally caused a shark to “start down (or up) a lane normally, and after a short while it would jump back to its starting position on the top (or at the bottom)”[2], along with five power-ups being added that can appear during the later levels to help the player out if captured in time before they disappeared (being ones that sped up the Medusa 1.5 times its original speed for several seconds, a shield to make the Medusa temporarily invincible to shark collisions, an entire row of crystals would clear out, the ability to slow down the sharks for several seconds and the end of level bonus can be refilled to the max rounded out the power-ups).

The intensity of the crystals’ appearance was slightly changed, as well as the initial graphics bug that plagued the first three versions was corrected (see later Trivia section).

Differences from the original Solar FoxEdit

Other than the sub-surface scene as opposed to space, there are a few differences in game mechanics between the original Solar Fox and Marine Fox.

Marine Fox is free for non-commercial use.

The controls are the same as with the original version of the game with the following addition:

The controls are the same as with the original version with the following additions: 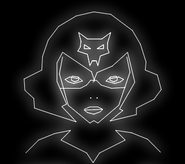 One of the sharks from the game 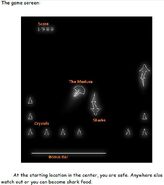 Page from version 1.0 instructions
Add a photo to this gallery

First off, I played Solar Fox at a nearby arcade back in the day, so I’m familiar enough with the game as it is. I never thought it was that great, which I would play a game of it and then move onto something else, so I can still judge and make a comparison with these games.

Going over the original version of Marine Fox first, it takes (somewhat) the gameplay of Clean Sweep and combines it with Solar Fox, which I can say this definitely blows away Clean Sweep. The game is challenging and there’s even the suspense of trying to swipe a crystal at the very bottom as you’re waiting for a blasted shark to appear (or not) and whether you should go for it or not. I also like this better than Solar Fox, even without the bonus waves and that you can’t shoot anything, especially with the crystal configuration/amount changing with every level.

The vector rendition of the Fox lady is pretty cool, along with the sharks looking pretty good and the brief tune in between levels will go through your head. The controls work fine, although they’re somewhat tricky (since you can’t stop ever once you get moving) but you should get used to them pretty quickly. However, the difficulty level is fairly high and all games are over with pretty fast, which, even though addicting, didn’t get me to rate this game any higher than a 6.75 out of 10.

However, as far as version 1.2 goes, THAT’S how you improve upon an already good game and then make it even better! A bug or two was fixed and the crystals twinkle a little, but the main thing was that a pause function was added, the pace was made easier (makes a BIG difference) and there’s not one, but a surprising five power-ups added to the game. That was really good for Mountain Goat to create all of those and put them in. The game was made more fun that way, raising my score to 7.25 out of 10 for that version.

Retrieved from "https://vectrex.fandom.com/wiki/Marine_Fox?oldid=7368"
Community content is available under CC-BY-SA unless otherwise noted.