The show has since grown to having up to (or over) 350 standalone arcade and pinball games, along with guest speakers brought in for lectures, more contests/door prizes were included, an extra day was added to the shows, miscellaneous entertainment machines have since been brought in (such as slot machines, music videos, concerts and movie screenings were ran, many vendors have also been added along the years and kickoff parties have been held elsewhere before an expo.

Starting with the November, 2008 show, home gaming consoles were added to the lineup. The Vectrex has been present at several expos since, including the 2018 show.

The majority of games at the show included many arcade coin-ops (several dozen) from the 1980s, such as Congo Bongo, Dig Dug, Galaga, Mortal Kombat, Rampage, Reactor, Street Fighter 2 Champion Edition, Stargate, Super Sprint, Top Gunner, Toobin', Track and Field, Tron, Xenophobe, Xevious, and Wizard of Wor, among many others. There was also a Nintendo Playchoice with several games included.

Several dozen pinball games were included in the batch, ranging from tables from the 1970s (Fireball) through the 1980s and 1990s (Bram Stoker's Dracula, Galaxy, Pinbot, Junkyard, The Addams Family) through the 2000s/present (Houdini, Last Action Hero, Metallica and Tron Legacy), among many others.

There were also miscellaneous games, such as Dragon Ascent, being a cross of a tabletop-like video game from the arcade, but roughly the size of a miniature pool table, along with the Pong Coffee Table, being a 3-D mechanical, rather than a video game. There was also the World's Largest Pac-Man, being several feet tall and wide, and several BattleTech Tesla II pod games that were interlinked.

Many home consoles/games were brought in as well, such as the Atari 2600, along with a pinball tournament and workshops were held (covering arcade repair and pinball restoration) and several speakers attended, which included video game designer Brian F. Colin (of arcade Rampage and Xenophobe), among many others.

There were also several concerts held, such as Camille and Kennerly (aka the Harp Twins), Consortium of Genius and Loaded Popcorn. The 501st Legion also had several volunteers at the show in Star Wars Stormtrooper costumes.

The local to Houston Guru Guys brought in two Vectrexes. Included with the setup was, along with the original Vectrex Control Panel, a Turbo Vectrex Controller from OpenBrite, LLC, along with Armor Attack, Scramble, Vector Pilot and Vectrexians, various overlays, a VecMulti loaded with games and one of the Vectrexes was adorned with a Vectrexians Vectrex Wrap. 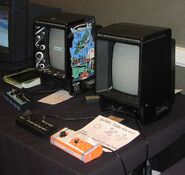 Two Vectrexes, along with overlays (left) and some cartridges 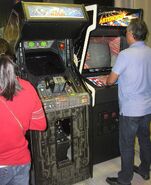 Omega Race (cockpit version)
Add a photo to this gallery

A row of Centipedes plus Millipede 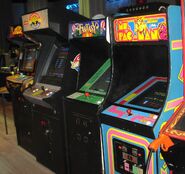 Reactor, Joust 2 and Toobin'
Add a photo to this gallery 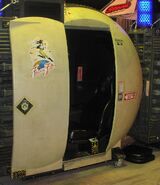 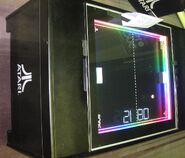 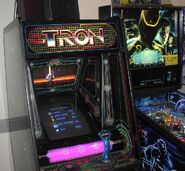 Row of pinballs
Add a photo to this gallery

Artist Camille and Kennerly in concert 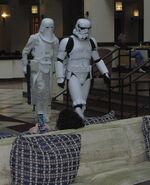 Retrieved from "https://vectrex.fandom.com/wiki/H._A._A._G._2018_expo?oldid=7944"
Community content is available under CC-BY-SA unless otherwise noted.