The show has since grown to having up to (or over) 200 standalone arcade and pinball games, along with guest speakers brought in for lectures, more contests/door prizes were included, an extra day was added to the shows, miscellaneous entertainment machines have since been brought in (such as slot machines), music videos, concerts and movie screenings were ran, many vendors have also been added along the years and kickoff parties have been held elsewhere before an expo.

Starting with the November, 2008 show, home gaming consoles were added to the lineup. The Vectrex has been present at several expos since, including the 2017 show.

This expo was held on October 20 - 21 at the 290 Crowne Plaza hotel in Houston. The majority of games at the show included many arcade coin-ops (several dozen) from the 1980s, such as Commando, Pengo, Monaco GP, Robotron: 2084, Blasteroids, Ms. Pac-Man, Donkey Kong, Rally-X and many more. There were also various MAME, PlayChoice cabinets and Retropies (having several games each, if not several dozen).

Several dozen pinball games were included in the batch, ranging from tables from the 1970s (Nip-It, Flash, Future Spa), 1980s (Joust tabletop and Baby Pac-Man, a pinball/video game hybrid), 1990s (Deadly Weapon, Doctor Who) the 2000s (AC/DC, Lexy Lightspeed and Heads-Up) to a virtual pinball tabletop (Pinball FX, which ran several hundred tables, many being emulated versions of real pinball machines [such as Kiss] to original tables [such as El Dorado, although not the same as the El Dorado pinball machine from the 1970s]).

Many home consoles/games were also brought in, which included the Sega Genesis, Atari 2600, Atari Jaguar, SNES and PlayStation, among others. Computer systems were also in attendance, which included several Atari home computers, the Commodore 64 and Apple II.

Along with many games/consoles/computers was a pinball tournment, workshops (covering arcade repair and pinball restoration) and many speakers, which included game historian Patrick Scott Patterson and video game designer Brian F. Colin (of arcade Rampage), among many others.

There were also many vendors at the show, which ranged from selling pinball machines to various merchandise, along with many raffles with door prizes awarded and the local band Consortium of Genius played a concert.

There were also two Vectrex display stations at the expo on this weekend, being from Re:Play Games and Starship Films (see Gallery).

Re:Play Games is a local Houston video game store. One of their many tables had a Vectrex, complete with a Vectrexians Vectrex Wrap, a VecMulti filled with games, several overlays and Vector Pilot, Clean Sweep, Armor Attack, Rip Off, Scramble, Star Hawk, Berzerk (two copies) and Spike games available to play.

The other table at the expo that included a Vectrex was from Starship Films. Although used mostly for promoting his movie releases (such as Conjoined) with promotional posters and the like, filmmaker/writer/director Joe Grisaffi also had one of his personal Vectrexes on display running the homebrew game based on his movie of the same name of Dead of Knight. 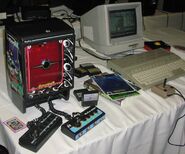 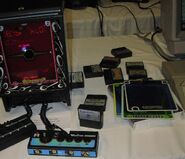 Shot of part of the console area. The Vectrex is in the background, left of center. 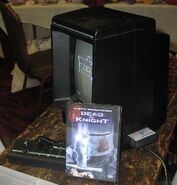 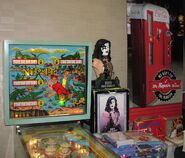 One of the many vendors at the show.

This article was featured from July - August, 2019.

Retrieved from "https://vectrex.fandom.com/wiki/H._A._A._G._2017_expo?oldid=7948"
Community content is available under CC-BY-SA unless otherwise noted.