Galaxy Wars, Space Launcher and Space Race all started off as arcade games. They would later be ported to the Vectrex in 2016.

The player controls a missile that appears at the bottom center of the screen at the start of a new game/level. The missile will flash, indicating it is in an invincible state. Once the player applies thrust the missile will be vulnerable to onscreen dangers.

The first danger are several comets that travel from one side of the screen to the other that must be avoided and cannot be destroyed.

With the more U. F. O.s that are destroyed the faster the remaining ones will move. Getting hit by a U. F. O. missile or a comet will destroy the player’s missile and the game will end when they have no more remaining missiles. If all U. F. O.s are destroyed, however, the player will advance to the next level, although they will first be granted a bonus for time remaining (which is denoted by a bar at the bottom of the screen).

Past the U. F. O.s are docking bays which the player must maneuver their missile into. If this is accomplished, their missile will reverse and start heading back towards the bottom; if the player is able to touch the bottom screen border they will be granted a bonus for completing the level and for any time remaining (again denoted by the bar at the bottom of the screen) and they will then proceed to the next level.

Touching any star field, U. F. O. (without the shield being active or due to the player striking the U. F. O. with their ship, rather than their shield), U. F. O. fire or docking bay side will destroy the player’s missile and the game will end when there are no more remaining missiles.

This combines the gameplay of Galaxy Wars and Space Launcher. At the start of a new game Galaxy Wars will play first, and if that level is completed then the first Space Launcher level will start. All game rules remain intact, switching games with every completed level until the player loses all of their missiles and the game ends.

The center of the screen has a bar that acts as a timer; once the bar reaches the bottom of the screen the game will end and whoever has the higher score is the winner.

This is a two player game only; one lone player can play either against the Vectrex opponent or two players can race.

Along with choosing from playing either Galaxy Wars, Space Launcher or both, the number of players (up to two) can also be chosen and the number of starting ships can be toggled (one, three [default], five, seven or nine, although this does not apply to Space Race). 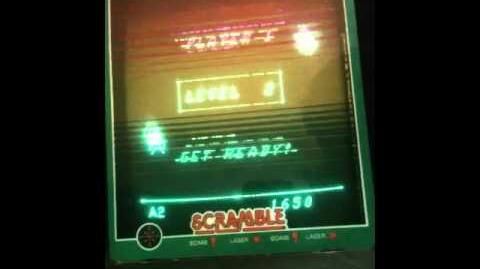