Some homebrewers produce new games for the Vectrex. Others dabble with new hardware and applications for the system, and some create or modify already existing game controllers other than the original Vectrex-issued ones for the system so they will be compatible with the unit.

Dan Siewers has done all three with his various homebrew products, as his technical knowledge (both as a hobby and professionally) has definitely expanded the borders for the Vectrex.

Siewers was born in 1969 and “was raised in a small town on the south shore of Montreal” (as Siewers stated in an e-mail). As a youth he “spent a lot of time playing hockey with my friends on outdoor ice rinks”, along with programming microcomputers and building electronics projects. Some projects in particular included creating a Vic-20 demo model of the Earth, which, even though it “used up all the expanded RAM...all continents were accurately represented”, along with creating some hardware-based projects for his KIM-1 “which had a user interface. The most useful was an automatic timer that controlled a solid state relay which turned an AC circuit on and off. My father used it to save on energy costs during the winter when he needed to plug in the bock heater of his car”. He also “once built a doorbell that would play one of 25 tunes. It was based on a melody chip I picked up at Radio Shack”.

As far as his early gaming years went, luckily for Siewers “there was a small TV repair shop near our house that had several arcade cabinets that they rotated out once in a while...where I played Armor Attack, Galaxian, Galaga, Pac-Man, Ms. Pac-Man, Burger Time and Mappy. Most of my arcade playing time was there during the winter when I couldn't ride my bike to the larger mall across town. My best friend and I used to go out and collect soda bottle[s] and cans and use the returned deposit money to play at the arcades...most of my arcade experiences happened within bicycle riding distance of my home.” Also, in regards to the “arcade across town”, that was where he “first played Joust, Donkey Kong, Space Ace, Star Wars, Out Run, Space Harrier, Pengo, and the list goes on and on”.

Then on the home gaming front, some of Siewers’s favorite Vic-20 games included many text-based games, along with “Cosmic Cruncher, Frogger, Sargon II Chess (my favorite) and Visible Solar System”. For the Atari 2600, he enjoyed Asteroids, Vanguard, Missile Command, Astroblast, Defender, Adventure, Centipede, Demon Attack, and one of the Swordquest games, among others.

And of course, his father bought the family a Vectrex back in the day, which, not only was it used for playing Rip Off, Mine Storm and Hyperchase, but it also became a stepping stone in Siewers’s learning of electronics (such as his realization that Hyperchase used the system’s analog joystick functions[1]) that would eventually help lead to him becoming a television engineer.

Electronics is definitely Siewers’ life, not only has a hobby, but also as far as a professional occupation as well, as he worked on the build-out of the Toronto Broadcast Center for the Canadian Broadcasting Corporation in the 1990s. He has worked in television his entire life in regards to project builds and production support. Starting in 1995, for instance, he worked across the U. S., as his job was to “design and build radio and TV stations...for a systems integrator”. He would end up settling in Los Angeles where he works “on the technology side of the entertainment industry”. His work has paid off, as in 1996 he “was awarded a technical sports Emmy for my work on the NBC Atlanta Olympic games. I got to work with some of the best broadcast technologists in the business and it was an experience I'll never forget.”

Years later upon becoming an adult and putting his technical knowledge to use, Siewers created two homebrews (playable on Vectrex emulators only, rather than being manufactured in cartridge form), one of which was Becky's Message, being a clone of the first level of Donkey Kong as far as climbing ladders and jumping over barrels to get to the top. However, the player has unlimited lives and has to jump over 15 barrels before Donkey Kong disappears and is replaced by a female at the top platform. Once the player reaches her, the scene changes to a full screen vector representation of Siewers, his dog Koko and his wife Becky of 11 years (as of 2011), with the words of “Dan loves Becky” appearing as a rendition of “This Kiss” by Faith Hill plays (which the song has a special meaning for the couple). Siewers admits that “it's sappy, but the end of the game is dedicated to my wife. It's the reason I created the game in the first place”.

Siewers’s other completed game is Koko's Retribution, which is a clone of the Atari 2600 game Yars’ Revenge. The original game involved the player readying their cannon to attack a foe behind a shield. Also like with Becky's Message, where four screens were simplified down to one, there is only one shield configuration in this game (as opposed to two on the original), and an attempt at a clone of the Atari 2600 game Laser Blast called Astro Blast (also known as Untitled) will probably always be an unfinished demo, as unfortunately Siewers lost the source code for it, even though he had planned for it “to be as faithful to the original as possible”. (All the player can do is move their ship around and fire in the demo, as there are no enemies that appear, much less be destroyed.)

On the hardware front, one of many new projects that Siewers created for the Vectrex involved a PS2 mouse to use with the system, which “the design centers around a Parallax Propeller chip with firmware that reads a PS2 mouse and then sends signals to a digital pot. The digital pot acts as a digital to analog converter, producing the voltages required by the Vectrex to interpret the mouse's x/y delta.” Siewers also “preferred using the second controller because it felt like playing Missile Command with a trackball at the arcade (as is shown in his video playing Patriots). Also, the mouse and digital pot have increased accuracy over the Vectrex controller's analog joystick ([as] they get dirty).”

Siewers also created a prototype USB ROM loader stick which could house all kinds of demos, games, sound files, etc. for the Vectrex. He last used a stick that was eight gigabytes in size (which would, as of 2011, make the largest known storage device for the Vectrex, as Andy Coleman’s 72 Game Multicart is only four megabits in size, for example), but “the hardware is now being used in a sonar-based doggy doorbell which plays MP3 files when one of my dogs wants to go outside”.

As the title suggests, perhaps Siewers’s most diverse project is the Vectrex Multifunction Adapter, which provides a pseudo SPI interface that interfaces to a PS2 keyboard and mouse, which results in being able to send characters out to a tv monitor (as shown in a video of his) and send and receive bytes via a USB connection to and from a PC or Macintosh computer. Also, “the system uses the Parallax Propeller chip with firmware that produces an analog video signal. This video signal could be captured on almost any device capable of reading an analog video signal.”

Even with as much as he has done with the Vectrex, Siewers has not documented on his web site in detail over what or how he has created his projects, and “I've probably forgotten a lot of the finer details of what I've built, but if someone asks a specific question about one of my projects I'm usually happy to answer it”. He figures that his projects “runs anywhere between $20.00 to $80.00" (U. S.), using “spare parts I have kicking around to proof out my designs, so it's not as expensive as it could be otherwise. I usually have two or three PCBs manufactured so that I can sell a couple of them off to help offset the cost.” 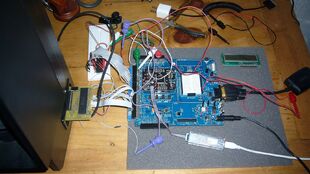 Not everything has worked as planned though, as some of Siewers’ projects have proven difficult to try to get to work, as “some ideas need to be shelved until a better one comes along. However, I'm usually able to make most of my concepts work. The 3D Engine is the most ambitious one so far and I've had to redesign the logic several times.” And speaking of which, in order to try to develop the demo, he is “just now in the early stages of shifting towards quaternions” for the project. “I originally cobbled together a PSOC development kit with a few memory chips to prove out the design. Since then I've designed a PCB to house all the components and added a ConnectOne embedded network adapter. The unit performs well and I was even able to make it connect to an FTP server to download ROMs.”

Even with as much as Siewers has done for the Vectrex, he still has plans for more. For instance, he’s working on a network adapter, as his Multifunction Adapter has an expansion port for future add-on peripherals. Also, as far as his 3D Engine Demo goes, “I would eventually like to turn it into a real product, but the price might relegate it to die-hard collectors. My time is very limited...I don't like to make promises I can't keep, so for now I'll only say that I may eventually bring some of these devices to the general public.”

Also, as someone had asked in regards to a post of Siewers’s on the Vectrex News Group if his Vectrex Extender (which adds 18K of extended memory, provides a web server for uploading files from an FTP server, an API for 3D object rotations and extended math functions, among other features) could support linked two player games over the internet, Siewers said that “the IP linked game scenario is possible with my latest creation, but it would take me a while to code the firmware required for such a feat. Also, I only have one said adapter so it would [be] difficult to test until I build another one.”

“I continue to design around the Vectrex because it's such a unique piece of hardware. There will never be another device like it. I can't promise anything but I would eventually like to produce something that could be useful to all Vectrex owners.”

The majority of the content of this article was the result of several e-mails between the original author and Siewers.