(from the instructions) Traverse time and space. Unravel the mysterious Vortex of Lost Souls. Solve the Leviathan Conundrum. Decipher the Enigma of Sorrow.

Continuum is mostly a puzzle game that requires the player to solve 10 puzzles by moving their ship over onscreen vortexes in a certain order to complete the puzzles and advance through the game.

The player can only change a vortex marked with a square inside it (meaning that the vortex is open) and if the corresponding vortex that the player is transported to is not closed (marked with an ‘X’). If the player passes their ship over an open vortex, and the exit vortex that they are to be transported to is closed, the player’s ship will take one unit of damage to their shields, the ship will remain in place and the puzzle will remain unchanged. (Passing over a closed vortex will also not affect the puzzle.) If the player’s shields take five hits their ship will be destroyed and the game will end. If the player can solve a puzzle, whatever damage their shields took during a round will be restored back to full strength at the start of the next puzzle screen.

If the player is stuck on a puzzle (i. e. all vortexes are closed and there is no way to complete the puzzle) and cannot solve it they can self-destruct their ship and end the game then.

Note: this is strictly a solution to the game, and won’t be going over any of the controls or gameplay, so hit the tabber back to the main page if you need any of that. Thanks.

The Blackest Heart solution: thrust into one of the vortexes at a diagonal from your starting point, being at either point A (see screenshot in Gallery) or B. You will emerge at either the vortex marked with a 1 or 2 depending on which one you chose (i. e. if you chose vortex A to start with, you will appear at vortex 1, if you chose vortex B, you will appear at vortex 2). Thrust down to bottom middle vortex C, then repeat at the opposite side, hitting either the lower vortexes of 1 or 2, which will send you to vortex A or B and complete the puzzle.

The Judas Paradox: there are several possible ways to solve this one, being two short and one long way.

Sectilius Demonicus: this one starts off with a sectoid latched onto your ship, so you’re going to have to kill it before proceeding. After that, just fly continuously one way and that will solve the puzzle: hit the top vortex box, then the middle, top, then middle again to solve it, or fly straight left or right, hitting all vortexes in the same manner (by flying straight in one direction, either going left or right) to solve the puzzle.

The Darkest Star: thrust down to the A vortex (see picture), which will transport you to either the 1 or 2 vortex. Then thrust to the opposite diagonal vortex from where you started from, i. e. if you arrived at vortex 1, then you’ll thrust to vortex C, then repeat on the other side, starting at vortex B and then flying into vortex 2 to finish the puzzle.

The Flames of Perdition: first off, get as far away from the two converging Mourning Stars as possible, before they collide and take you out with their ensuing explosion (or before they collide with you and end your game that way). After that, this puzzle can be solved somewhat in the same manner as taking the long way in The Judas Paradox.

The Leviathan Conundrum: the player starts at vortex B (see photo). Fly into the A vortex, which is the left vortex in the second from the last row on the bottom of the screen. This will take you to the very top vortex; fly into B, then into C in the very same row (being the last box on the right). Fly into B again, then D, being the right vortex in the second row from the bottom, and then thrust into B one last time to beat the game and wonder what the upcoming sequel of Hellhole: Sector-X IV will have in store for you... 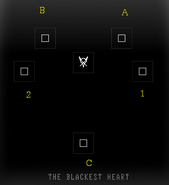 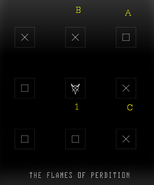 The Flames of Perdition

The Wages of Sin 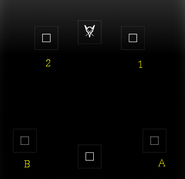 The Eyes of Baphomet 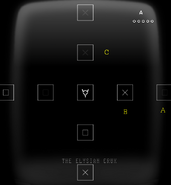 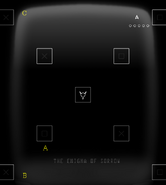 The Enigma of Sorrow

The Leviathan Conundrum
Add a photo to this gallery

Continuum is still one of the very few puzzle games for the Vectrex, so this is a welcome addition to the scant void of this genre for the machine.

Like the main page says here, destroy any sectoids in a puzzle, avoid the Mourning Stars in the fifth puzzle, and figure out what vortex boxes to steer your ship into in between those dangers order to advance to the next puzzle. That's simple enough, and this is a pretty good thinking game.

The graphics to the sectoids are fairly good, although they're unchanged from the previous Sectis game, but with the majority of the content being vortexes here, the graphics average out to being pretty simple, and if this game came out on a current game console, it'd come with an epilepsy warning! Boy, those flashing boxes can really do in the eyeballs! There's also not much sound, but it's adequate, although I've never liked the sound of your ship thrusting around (as it sounds like a mosquito).

About the only bad things about this game is that one, there are people out there that once they beat a game they will never play it again. I'm not one of those, and I kept playing this for a couple of weeks after I beat it (for some reason), but for those that aren't like that there's nowhere else to go from there. The second bad thing is that before this happens, you have to go through several previous puzzles over and over again until you figure out the current one you're stuck on, and then it might be a while before you can figure it out. Granted, the game is out now as a free download, so you can save the game at whatever puzzle you're stuck on with an emulator, luckily, but for those who bought this game before that happened, it probably got a bit old with them too, I imagine.

And last as far as the negativity goes, the game has pretty much the exact same ending as the previous Sectis, which stinks. If I remember correctly (I'll admit I'm being too lazy to look it up), the game is just 16-18K in size, which, like with Sectis, could have had a cinematic part to the end (as Sectis had a mini-movie at the beginning of all levels). This could have been done here, showing the player's ship approaching a fullscreen version of whatever entity might be found in the next installment of Hellhole: Sector-X IV, unless it's too early in the planning stages to call (kind of like how some people didn't like the change between the ending of the Evil Dead 2 movie and the beginning of Army of Darkness, where at first Ash looked to be the hero, then that changed once Darkness was released). I mean, just having it say "end" again...c'mon, that's just lazy! I'll admit I still had a grin appear on my face when I first solved it though, but still, I'd like a little more than that. (Later edit: programmer George Pelonis has since let me know that this game was a rush job in order to have it out in time for a game show. I didn't mean "lazy" in regards to how many games he had come out with [three in the same year], just the same ending for Sectis and this one. Sectis was a full 32K and he had no more space.)

And in conclusion, this is one of the few Vectrex games out (I think) where it does a good job of making you feel stupid, since you could take quite a bit of time figuring out how to solve a puzzle, then when you finally got through it, you'd say "oh, THAT'S all you had to do!", since most of the solutions are actually pretty simple, not requiring a lot of moves.

This article was featured from July - September, 2012.

Retrieved from "https://vectrex.fandom.com/wiki/Continuum?oldid=5766"
Community content is available under CC-BY-SA unless otherwise noted.