This is a catalog of peripherals/hardware for the Vectrex, organized alphabetically by name.

Vectrex controller (original)--this was the controller that originally came with a new Vectrex or was sold separately (a new unit only came with one controller). The Vectrex was one of the first ever video game systems (another one was the Atari 5200) that had an analog joystick. It also had four function buttons, which was a lot for a controller back then. 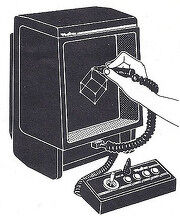 This article uses material from the List of Vectrex peripherals Gaming Wikia article and is licensed under the Creative Commons Attribution-Share Alike License.

This article was featured from July - August, 2011.