"Take control of a treasure hunting diver in this exciting game of deep sea exploration. Select your dive location, explore to discover many species of fish, and maybe even find the key to a treasure chest for big rewards. But keep an eye on your air supply and watch out for the shark!

"Can you explore all the island locations, recover the treasure and discover all the species lurking down below?"[1]

The player has two goals to achieve during a game: to discover as many fish species and gather as much treasure as possible.

Each game starts off on the map screen, giving the player five choices as to where they should dive to begin their exploring. Once an area is chosen, a boat will take the player’s diver to that location so they can dive towards the sea bed of that area. If, upon making it to the floor bed and there is no key, nor treasure chest, the diver must swim back up to the boat and return to the map screen to pick another dive location to explore.

Fish are identified automatically by making it to the sea bed; a new fish is added with every new level.

There are several hazards that the player faces, however, as they have an oxygen level to keep up (denoted by the Air bar at top right of the screen). If the player runs out of oxygen then they will lose a diver and the game will end if all three divers are lost. Additional oxygen can be added if the player comes into contact with air bubbles found on most dive screens, as well as breaking the surface or boarding the boat. Coming into contact with jellyfish will also cost the diver oxygen.

A shark also guards the floor bed, which, if the diver gets too close to the shark, it will be alerted to the diver’s presence and make a beeline for the player. Coming into contact with the shark will cost the player a life, along with causing them to drop whatever they are carrying (being either a key or the treasure). The diver also has a speed burst defense where they can swim faster, although this takes up twice as much oxygen.

The dangers increase with every treasure that is successfully brought onto the boat, as more jellyfish are added to the first diving screen, along with their speed increasing. Moray eels also are added to the depths, having three per screen that move horizontally and will cost the player a diver if they come into contact with one of them. A swarm of jellyfish also start after several levels (which these screens also do not contain any air bubbles), along with caves that do not have any enemies, although the cave walls require the diver to swim around them. At the start of a new game, the player must dive two depths in order to reach the sea floor, plus one screen depth is added for each new level. There are also additional shark screens, along with the sharks becoming more aggressive.

Accessible from the startup menu is a bonus game where the player controls a surgeon fish this time around. Eels, sharks and jellyfish move horizontally from one side of the screen to the other. The player’s fish can produce droppings that will only take out jellyfish (making contact with any other fish or the shark will have no effect). All enemy sea life will start increasing speed as more and more jellyfish are destroyed and if any creature makes contact with the player then the game will end.

Along with the bonus game is the ability to calibrate the air gauge so it will line up with the game’s overlay. Also after a game is a treasures captured and fish identified screen that will show what all the player encountered.

When the production of Big Blue was announced in 2014, probably the majority of the Vectrex community was immediately enthralled, as there haven’t been many nautical-themed games for the machine since it was originally released in 1982. Then once that SHARK was shown as well; wow! This was killer (who isn’t interested in sharks in general?). Big Blue is also only a handful of non-violent games for the Vectrex as well, making it a good one to play for the whole family (those that are into our beloved vector machine, that is, as some people just don’t “get it”, unfortunately).

The game sold out pretty quickly upon release and is, to the best of my knowledge, a bit original, but with tons of games being made since the dawn of commercial gaming there could be other similar ones, but at least it’s quite original for the Vectrex.

First off, the packaging is very cool, having the look of the GCE/Milton Bradley/Bandai boxes from back in the day but crossed with more modern day web sites included and all (thanks for the shouty of my vector gaming forums!), although unfortunately there’s a few typos in the instructions. The overlay is simple and looks nice, and for those who got the blue circuit board version that was also available, again, that SHARK is imprinted on it, which is very cool (although minus the overlay with that package though).

Upon starting the game, the music is good and fitting (even sounding like the Jaws movie theme initially), although it would’ve been nice to have the option to turn it off), although there are not many sound effects in this sea adventure. This release has, I do believe, bar none THE best graphics ever in a Vectrex game, as you can tell what every single creature is in the game, along with the treasures, although those are blown up real largely on the screen but they’re also well drawn. Controls also work very well.

The game starts off simple, but once treasures start accumulating, dive screens start adding up, taking longer and longer to reach sea beds. Some might find these plodding to go through several screens to not finding the key, nor treasure, but I don’t really mind them (Pitfall! screens [on many console and computer platforms in the early 80s] where you’re just running with several logs and there’s no treasure to pick up might be an apt comparison). Difficulties ramp up with larger and larger levels, more jellyfish appearing, eels being added, screens without oxygen bubbles to fill your meter and the shark being aware of your presence quicker.

The included bonus game is simple and I didn’t find to be real fun but at least it was included in the package, along with not having to be unlocked.

There isn’t a lot to dislike here; not everyone can make it to the last treasure and fish, but for those that can might’ve been disappointed as to there being no ending (the last fish and treasure are pretty funny and clever though!). It’d be nice to be able to shoot the shark occasionally (maybe for a sequel...). Calibrating the oxygen bar meter is worthless to me, as it gets out of whack, appearing below the area on the overlay (although maybe my Vectrex is starting to get jittery or maybe my model wasn't playtested) although this isn’t much of a big deal, as you can still see it (you can see what I mean with a score I posted here). It’d also be good to remove the "dive to sea bed" message after clearing out a few levels (c'mon, we know how to play the game by now!).

As you want to get deeper into the game (sorry) to see what the next fish and treasure is, this is something that creator Chris Parsons should definitely be proud of. And, even though it can be annoying at times, that shark still rules. 7/10 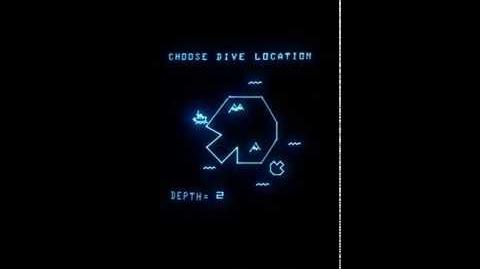